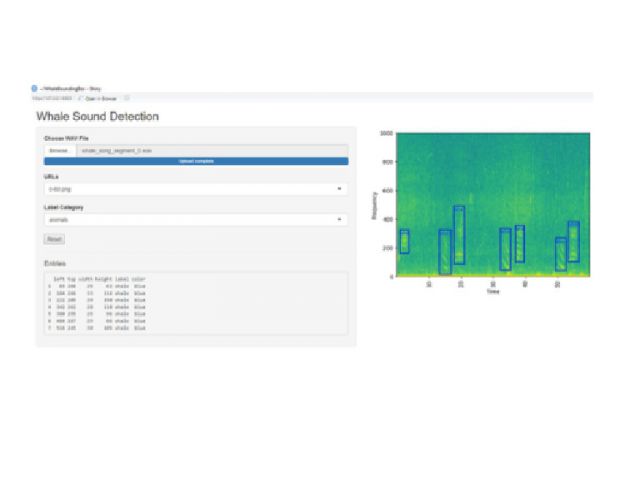 Program to create training data for our machine learning pipeline

As humpback whales are a migratory species that reside in the ocean, it is challenging to observe their habits and patterns easily. However, by placing a hydrophone in areas they frequent, it is possible to capture their songs and other noises they make from the ocean floor. However, we cannot control when the whales come in range of the hydrophone. Nor can we prevent the hydrophone from capturing other kinds of noises, such as those made by humans, other animals, and the ocean itself. Additionally, there is no way of knowing where any of these noises are located in the audio file produced by the hydrophone without listening through the entire file.

As whale sounds are often faint, it is difficult to study whale sounds using the raw audio file alone. Thus, a common preliminary step is to first convert them into a spectrogram and annotate the times and frequencies the whale sounds appear within the file. But as these audio files are often a few hours in length, this process tends to be tedious by hand. Our goal for this project is to streamline this preliminary step, by creating a machine learning pipeline that uses an object detection algorithm to detect the locations of anomalous sounds within a spectrogram produced from the audio file. By knowing where in the spectrogram an anomalous sound is located, we know when we can hear them in the audio file, saving a lot of time spent in manually detecting them. We also hope to further refine this pipeline to detect whale noises specifically.